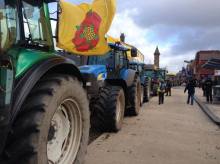 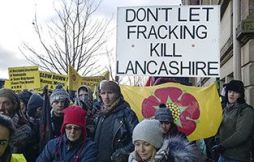 Yesterday saw Preston fill with concerned people from across the UK, they had travelled from the early hours to come together to support Lancashire, as the council went into a meeting with Cuadrilla to decide if they would be the first UK county to allow fracking to start.

There had been strong signs that the decision was going against Cuadrilla. Last week the council’s own planning officer said the applications should be refused.

Cuadrilla then asked for a late deferral – despite having had months to prepare its case.

Yesterday, after a few hours of a private meeting, Lancashire council called the planned two days of talks short and deferred the decision about permission to frack for another 2 months.

Cuadrilla’s use of the planning system has created more uncertainty for communities – people whose health and environment are at risk from controversial fracking.

Now it’s even more important to stand with Lancashire. Please sign and share their petition to keep the UK frack free

Donna Hume, of Friends of the Earth said “This smacks of a desperate attempt to inflict a dirty industry on a public who don’t want it. Surely this is simply delaying the inevitable – for an industry which is out of touch at a time when we need clean energy, not more fossil fuels.”

Widespread public concern clearly helped force Cuadrilla onto the back foot and made it difficult for the council to find in its favour.

More than 25,000 people have signed a petition to Lancashire Council leader Jennifer Mein calling for the applications to be refused. Early this week many residents, businesses and community groups wrote to councillors opposing fracking.

Earlier this week Friends of the Earth exposed the level of collusion between Cuadrilla and the Government. A leaked letter from the Chancellor George Osborne revealed plans to push through fracking in Lancashire even if the council rejected Cuadrilla’s applications at this stage.

The Environmental Audit Committee has recommended that fracking should be put on hold in the UK because it is incompatible with our climate change targets and could pose significant localised risks to people and the environment.

The Community spirit was strong yesterday in the gathered crowd outside the Lancashire Council offices, as it was in London on Monday outside Parliament. People are standing up to insist that their views are heard… the more the merrier… together we stand strong in solidarity and the protection of our future.