The Purple Area Shows the License Block Granted to iGas for CBM exploration on the Wirral.

To extract the gas, after drilling into the seam, it is necessary to ‘de-water’ the coal and so large amounts of water are pumped out to lower the pressure. It is often also necessary to stimulate the coal seam via fracking in order to extract the gas. There are a similar catalogue of negative environmental and social effects as with Shale Gas Fracking. 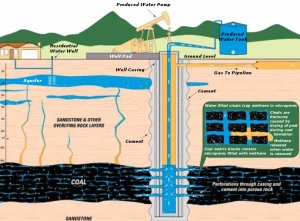 This includes methane migration, toxic water contamination, air pollution, increased carbon emissions and the industrialisation of the countryside. Impacts that are specific to CBM include depletion of the water table and potentially subsidence.

In common with other unconventional gas extraction, such as Shale Gas, CBM wells do not produce large amounts of gas per well and production declines very quickly. It is therefore necessary to drill large numbers of wells, covering a large swaths of the landscape. Across the Wirral and West Cheshire license areas it is estimated that it would require hundreds, and maybe thousands, of wells to be built to extract the amount of gas that iGas claim could be recovered. 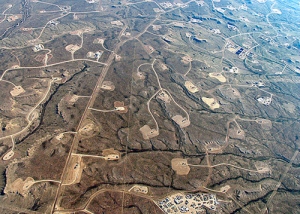 Vertical Well Pads in the US 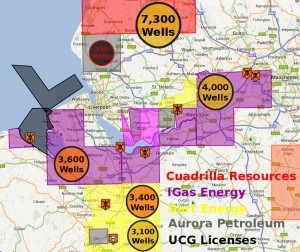 Estimated numbers of wells based on iGas predictions about the vastness of the coal bed in the area.

The proposed area covered by the Wirral CBM exploratory license potentially means that this could impact on large areas of natural beauty, including Wirral Country Park if given the go-ahead.

To get methane out of coal seams the groundwater trapping the methane must be continually pumped out. The water contains a cocktail of chemicals including carcinogenic hydrocarbons such as benzene, toluene, ethyl-benzene and heavy metals such as arsenic, cadmium, lead and mercury. In Australia 10-40% of coal bed methane wells are hydraulically fractured to increase the flow of water and gas.

Millions of litres of produced water has to be disposed of from each well. Over time this represents a massive volume of water and toxic material released into rivers, estuaries and the sea. In most cases the industry claims that the water does not require treatment or detailed monitoring. Picture shows a “designated outfall” taking untreated water from a CBM site at Airth, Scotland into the Firth of Forth.

Continuous removal of water from coal seams depletes ground water and may eventually lower farmers boreholes and surface water flows (streams and rivers). It can also change the flow of groundwater drawing fresh water into the coal seams. Lowering the water table has allowed methane and other gases to be released indiscriminately in Australia.

Methane, hydrogen sulphide, nitrogen oxides (Nox) and other aromatic hydrocarbons are emitted from sites. Noise pollution and further emissions of methane and airborne pollutants occur as the gas is processed and pressurised in sprawling temporary infrastructure. Flare stacks burn off unwanted gasses and cause noise and light pollution and more toxic emissions.

The Coal Bed Methane (CBM) process along with hydraulic fracturing is designed to extract methane from coal seams. The gas wells themselves are the most common pathway for methane migration (leakage). This can lead to high levels of methane in streams, aquifers and eventually drinking water. Methane is 100x worse (on a 20 year time frame) than carbon dioxide as a greenhouse gas. Picture shows the Condamine river in Queensland bubbling with gas.

6% of gas wells leak immediately and 50% of all gas wells leak within 15 years. CBM exploration requires many thousands of wells to be drilled. These wells can never be removed or recycled, the steel and concrete structures plunged deep into the geology will decay slowly over time. All gas wells will leak eventually.

Many wells require many sites which in turn require access roads, foundations, floodlights and enclosures. This pattern of development divides countryside, threatens rights of way and damages and slowly destroys the natural beauty and diversity of an area. Picture shows site at Airth near Falkirk, Scotland.

The jobs created by the fracking industry are small in number for the size of the investment. Local job creation is short term, unskilled and in high risk areas/occupations. These workers are at increased risk of industrial disease and accidents. Exposure to chemicals and produced water creates acute health risks for workers. The large volumes of sand (silica) used in the fracking process is causing a dramatic rise in cases of silicosis (lung disease) in the US.

Pipelines used for transporting gas and waste create the additional danger of leaks and explosions. Pipeline construction cuts scars across the countryside and blights surrounding areas with planning restrictions. A sprawling temporary gas infrastructure is needed to connect thousands of sites across the landscape. Flare stacks burn off unwanted gasses on every site and cause noise/light pollution and toxic emissions. Noise pollution and further emissions of methane and airborne pollutants occur as the gas is processed and pressurised.

The result of this type of industrial development on the countryside is catastrophic. Wildlife corridors are disrupted. Edge effects created by the cutting up of habitats into smaller and smaller pieces threaten biodiversity and the release and distribution of toxic compounds adds to the cumulative impact. Picture shows 70 CBM sites in Queensland Australia.

If this industry is allowed to get a foot in the door in the UK the number of communities under threat will increases massively. The impacts and dangers are acute and borne by local communities who find themselves living in a gasfield. The rewards go to an elite of shareholders, directors and investors. Stopping this industry in the UK will send a clear message to other countries that the impacts and dangers are unaceptable.

Farming and food production, recreation and tourism suffer at all stages of coal bed methane exploration, production and legacy. An areas reputation and landbase are exposed to long term dangers that exist long after the industry has gone.

Coal is the dirtiest of the fossil fuels and 70% of UK coal is considered un-mineable. Companies are already speculating that once coal seams are de-watered and degassed the coal can be extracted using other techniques. Open cast mining or burning the coal in situ (Underground Coal Gasification) will increase our use of coal and have devastating impacts for our land and climate.

Wherever fracking is happening, including Texas, Colorado, Pennsylvania and Queensland, people are getting sick as a result of the toxic, carcinogenic and hormone-disrupting chemicals they are exposed to via both air and water, with symptoms from headaches and breathing difficulties to neurological impairment and cancer. Animals and crops have been killed in Alberta, North Dakota, New Mexico, California and Pennsylvania as a result of exposure to chemicals from fracking and drilling operations.

Just removing drilling mud and waste from wells will require many tanker/truck movements for each site. This is in addition to construction vehicles and drilling and fracking equipment when the site is commissioned. Because the lifetime of each CBM well is short (2-5 years) this armada of heavy vehicles will roll across the countryside.

Road damage is an inevitable consequence of CBM exploration due to intensive transportation of materials and machinery. Subsidence and earthquakes may be caused by the process and are quite common in conventional coal mining.

Home owners in CBM extraction areas can find themselves trapped in a house they can not sell, re-mortgage, insure or develop. An area already suffering from a decline in existing industries is further impacted by industrialisation (sites & pipelines), air and water pollution and the resultant health impacts.

The current economic system is addicted to cheap and abundant fossil fuels. Investment in increasingly dirty and dangerous fossil fuel extraction and a new wave of extreme industrialisation undermines any attempt to reduce energy consumption or become self sufficient. Fracking will not reduce or set people free from their energy bills. It is a direct threat to investment in insulation, localisation, energy saving, energy efficiency and renewable energy technologies. It perpetuates our dependence on finite resources and sabotages the life chances of future generations.

CBM will not replace other fossil fuels, any gas produced will be burned in addition to the oil, coal and gas that has already been discovered. By developing these new energy extraction techniques we are expanding global reserves of hydrocarbons and increasing emissions. The chemistry of the atmosphere is changing and due to drought, flood and starvation the death toll already stands at 450,000 annually.